Flat rate UK Postage of £1.75 will be added to this order.

LUKE KENNARD’s first pamphlet in six years – Truffle Hound – kicked off our experimental pamphlet series with a bang in 2018. More resolutely prose than any of his previous books of poetry (although not his novel) here Luke allows his childhood (imagined or otherwise) to flood into the foreground, while his present (factual or fake news) distorts and fractures as if his life were being directed by David Lynch and Terry Gilliam and neither could agree whether horror or comedy should dominate. Dogs, cigarettes, children and pills shouldn’t really be permitted to mix should they? Here they are a heady mixture indeed!

With that nonchalant way that Luke has of seeming to toss words as if they were his hair, Truffle Hound piles neuroses on top of neuroses (not necessarily Luke’s) as it tackles subjects as wildly varying and yet somehow connected as over the counter pain-killers, the domestic struggles of humans on other planets, scathing criticism (both literary and personal), transistor radios and shops – an inordinate amount of shops. (The shops are where you can buy the pills and cigarettes and food for the dogs.)

We found out today that in some colleges across the land, a certain kind of poetic output is sometimes described as being Kennardian. We don’t know if Truffle Hound is Kennardian or not. (Perhaps it is Neo-Kennardian?) But we are hoping that one day soon, something, somewhere, of very little interest if needs be, will be referred to as Vervian. We are hoping this a lot.

Luke Kennard is a poet and novelist. His books have been shortlisted for the Forward Prize, the Desmond Elliott Prize and the International Dylan Thomas Prize. He lectures in the School of English at the University of Birmingham.

Luke Kennard is the author of numerous works of poetry and short fiction. HIs first collection of poems, The Solex Brothers, was published in 2005, and won him one of that year’s Eric Gregory Awards. His second collection, The Harbour Beyond the Movie, made him the youngest writer to be nominated for the Forward Prize for Best Collection in 2007. He has since published further collection of poetry, and pamphlets, one of which, The Necropolis Boat, was the Poetry Book Society’s Pamphlet Choice in 2012. Notes on the Sonnets won the Forward Prize for Best Collection in 2021. In addition to poetry, he writes criticism, short fiction, and a first novel. He currently teaches English and Creative Writing at the University of Birmingham. 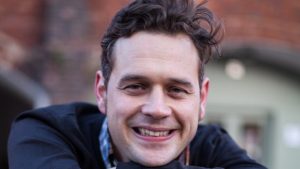