Love The Sinner is the second collection from poet and theatre-maker, Imogen Stirling. A fusion of poetry, theatre and electronic music, it will premiere as a stage show later in 2022.

The seven deadly sins are alive and kicking hard in contemporary Scotland.

Swooping from the mundane to the immense, Stirling’s long-form poetry weaves narratives of human experience. A loose alliance of extraordinary and unextraordinary characters struggle to comprehend their identities in a world bladed with criticism and obsessed with self-betterment. This story sees ancient roots clasp hands with modern compassion to explore human frailty, love and resilience, while the threat of ecological crisis rumbles in the background.

Mirror and rallying cry both, Love The Sinner reflects on the meaning of being human today.

Imogen Stirling writes beautiful, wry but bell-clear truths. Each of her sins is a perfect creation, utterly recognisable but never a stereotype. (Kirstin Innes)

This collection demonstrates just how creative a thoughtful and intelligent poet can get with sin. I think this is the work of a lyrical genius. It is crafted by a great poet, and crafted with emotional depth. There’s nothing like this. There’s no one like Imogen. (Benjamin Zephaniah)

From one of Scotland’s ones to watch, cometh this delicious word crumble—well-seasoned in brass & bravura. As intriguing as it is accomplished. (Michael Pedersen)

Imogen Stirling is a voice of our generation and Love The Sinner a journey into the archetypes that lie dormant in each and every one of us. Honest, raw and beautiful it offers catharsis and empowerment. (Nightwave)

Her use of descriptive vivid language gels her to the page, while her blazing theatrical style is sure to stage further success for the viewer, offering a deeper layer, a more ferocious aesthetic. (Janette Ayachi)

A rich and other worldly book, a compelling work woven with gold threads of resistance and resilience, connection and human nature. (Salena Godden)

Imogen Stirling is a Glasgow-based artist. She is a performance poet, theatre-maker, musician, writer and facilitator. Imogen has performed her work extensively around the UK and Europe, with partners including Sofar Sounds, BBC Scotland, Latitude Festival, Lindisfarne Festival, Neu! Reekie! and Aye! Write. She can currently be seen on Sky Arts’ BAFTA-winning show Life & Rhymes where she performed alongside Benjamin Zephaniah and Hollie McNish. Imogen was the inaugural Writer-in-Residence for Paisley Book Festival 2021 and is currently leading Wigtown Book Festival’s youth programme. She was recently awarded ‘Artist of the Year 2021’ (Scottish Emerging Theatre Awards/National Theatre of Scotland). 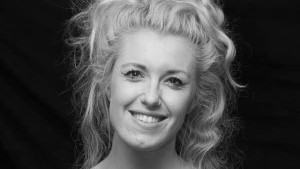