Define Hope is an intimate glimpse into the journey and thought process of a poet navigating debilitating chronic ill health, grief, loss and pain. From the darkness of losing faith, the bitterness of grieving her former self to the light she often found during her most trying times. Define Hope is a reflection of the extremes of emotion we each face – the exhausting and unpredictable shifts of anger, hopelessness and sadness and their relationship to our mental health and self belief. Evrah exposes herself and her conflict with the world in an unflinching look into her life since her last release.

Evrah Rose is known for her fearless energy and hard-hitting lyrics. Not one to shy away from a tough subject – Evrah has produced a number of thought-provoking viral videos, racking up over 5 million video hits on social media. Her first musical release, Labyrinth (2017), was aired via BBC Introducing on BBC Radio Wales by Adam Walton within the first few days of its release. Evrah released her debut poetry collection – Unspoken – September 2019 – launching in both Waterstones, Birmingham and Bank St. Social in her beloved hometown of Wrexham.

Read about and purchase Unspoken HERE 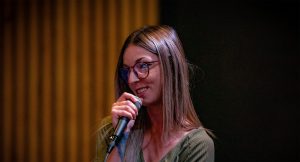