‘I think possibly that what I write comes out differently for having been suppressed, there’s more of a pressure to it—and, when it does emerge, it’s maybe colliding with a different world from the one in which the material was laid down – in the manner of geological layers, perhaps!’

Did you know? Geraldine spent some years living in a silent monastic order in South America —now that's something to talk about!

Geraldine Clarkson is from the UK Midlands, with roots in the West of Ireland. She has three poetry chapbooks, including a Poetry Book Society Pamphlet Choice and a Laureate’s Choice. Her work has  featured in many anthologies including Furies: A Poetry Anthology of Women Warriors (For Books’ Sake, 2014) and Witches, Warriors, Workers: An anthology of contemporary working women’s poetry (Culture Matters, 2020).

She has performed poems at the Royal Albert Hall, broadcast for the Proms Extra Lates on BBC Radio 3, and also at several festivals, the Poetry Society AGM, and at poetry venues in London, New York, Dublin and Edinburgh. Her first full collection was with Monica’s Overcoat of Flesh, Nine Arches Press 2020.

Crucifox is more a state of mind than a particular creature or person. The collection circles rebellion, emergence from disappointment and fasting, new beginnings, recreation following destruction; soulwork; inspiration and the act of writing itself.

There is a focus on female desire and feral impulses behind polite exteriors; assumed responsibilities and pre-packed creeds; the role of women within close-knit community, the silent and marginalised aspects of women, their masking and unveiling and the stilling of their tongues. There is no shortage either of vermin and sleaze, crime, including murder; along with curlicues, cleaners, clowns, gambling, lotteries, and a lot of luck… 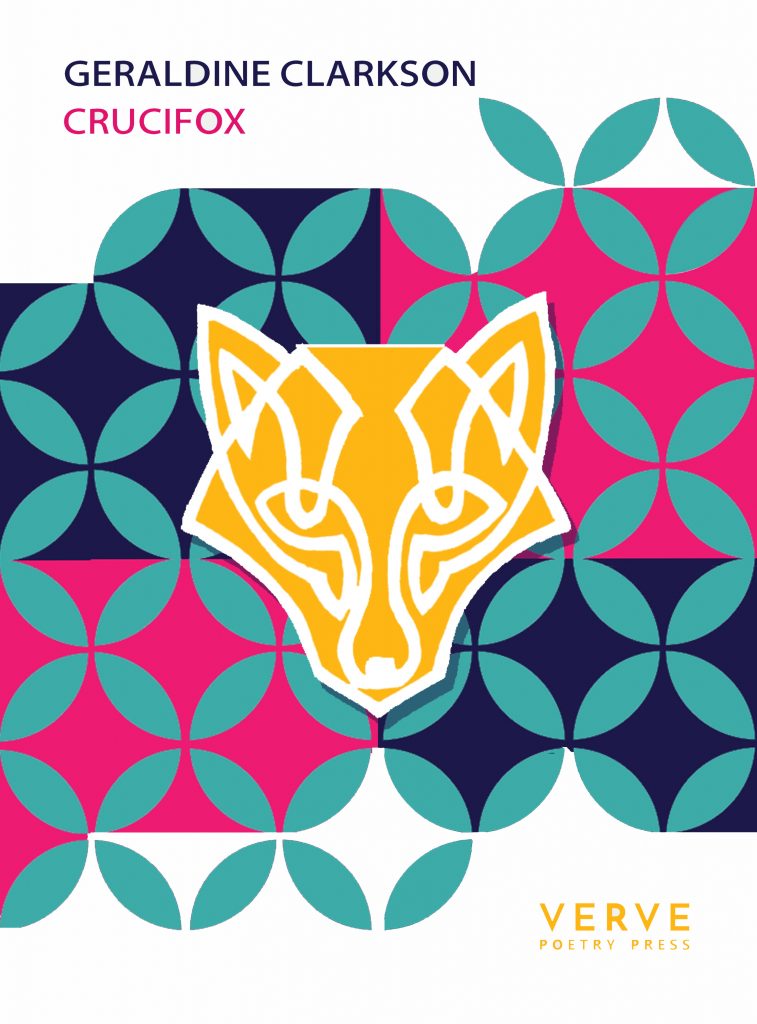 When the sun had set and darkness had fallen, behold, a smoking firepot
and a flaming torch appeared and passed between the halves of the carcasses.

On a hill, I always thought, I’d have an encounter, woman
to God; or in the candled calm of some huge-statued
basilica, its sparkling dark. Perhaps at a tree-
starved shrine, with pilgrims stretched in crocodile;
or in bed—through the night—like in Psalm 63.

Maybe via an angel, masquerading
as a stranger. Or in the bath,
public or private—it’s not unheard of.

animals caught, blood-let, slaughtered, halved, set out in a line.

'Geraldine Clarkson's exuberant poems continually delight with their striking originality and linguistic panache. I never know where her often whimsical, at times surreal narratives will take me, but I always enjoy the journey.'
Carrie Etter
Order Crucifox Now 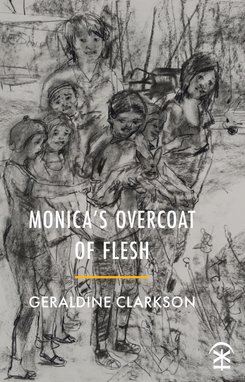 Geraldine’s debut collection Monica’s Overcoat of Flesh was published by Nine Arches Press in 2020. Richly detailed and formally audacious, the collection is an exploration of enclosure and freedom, of silence and music, and of the impermanence and wonder of the flesh.

These poems contain the uncontainable; spellbound and courageous, they roam from South American monasteries to the shorelines of memory and the truth-towers of the self, surveying matters of faith, being, tragedy, and womanhood.

Geraldine’s poem ‘The Fainting Room’, which features in her pamphlet Crucifox, was performed by Rebecca Hare for Live Canon and shortlisted for the Live Canon International Poetry Prize 2018.